It was a nail biting finish with Leeming stabilizing to win with 28 ½ points, Wesley came in second with 26 ½ points and Perth Modern third with 23 ½ points.

We also had Amber come in as runner-up Top female player.

Congratulations to the whole team on a fantastic result – Including all the Chess Club members who didn’t make the Finals group but competed regularly against each other and also in the Regionals, which helped to improve everyone’s skills and to get the team to the State Finals

Next step - Nationals in November. 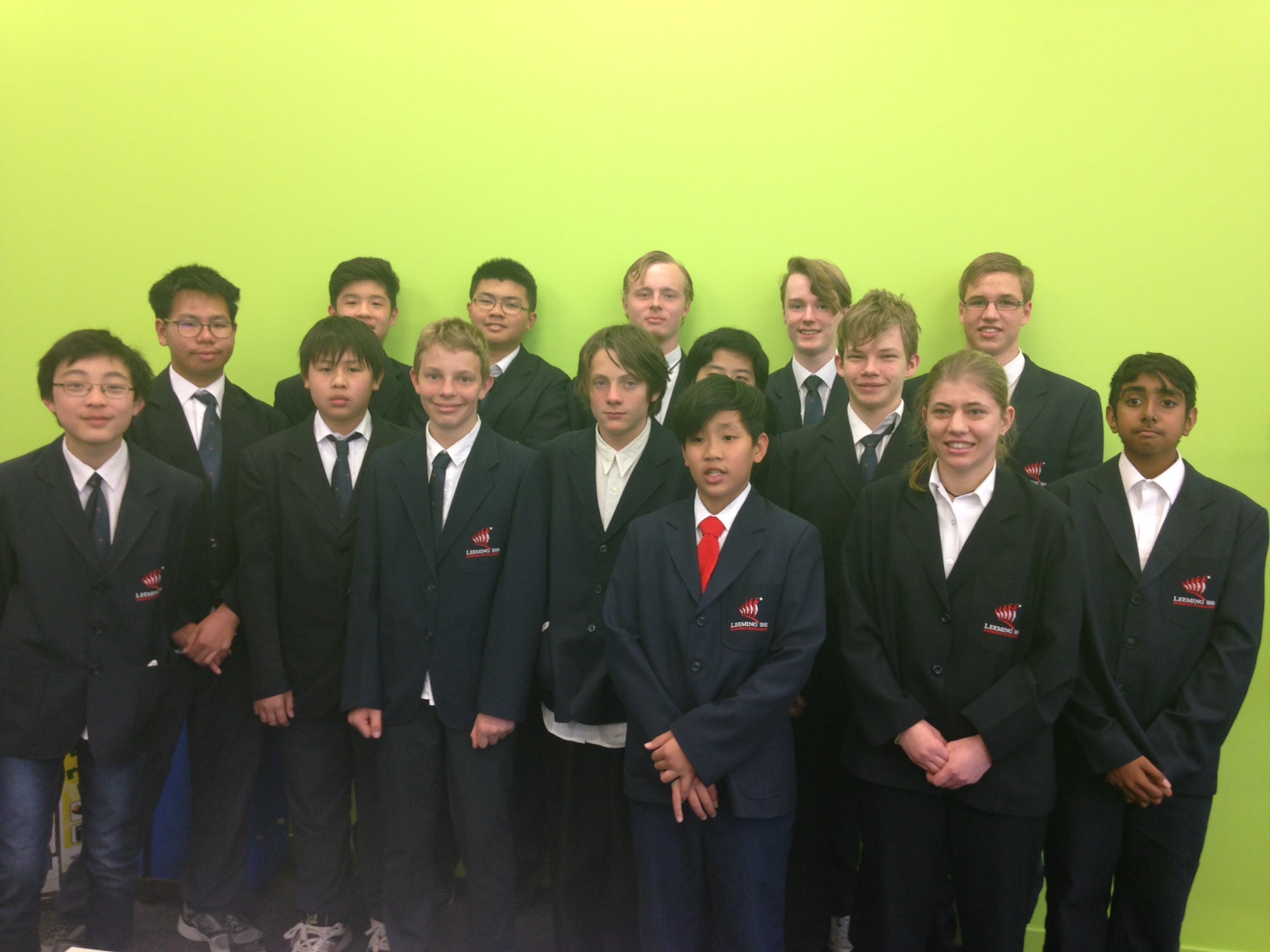 A long overdue upgrade to the Aulberry IT area in the Library will begin in term 3. The old carrels will be taken out and all the electrical wire and cabling will be replaced. Over the last few years, when the computers are heavily used - the 30 year old electrical board kept crashing.

Along with new wiring and cabling, we are also going to place benches around the area with two large tables in the middle for smaller groups. We will also include some bright new seating arrangements for students to work comfortably.

Hopefully, the upgrade will only take about 3 weeks and shouldn't cause too much inconvenience to the students and staff but it will be fantastic when it is completed.

We have created a large Lego Wall in the Library. Students are free to come and add their own designs and creations. Some resourceful Year 7 students created a water irrigation system and then others added a whole community around its surrounds.

2016 term one has been very busy with lots of lovely Year 7 students settling in beautifully to high school. They have been very busy getting to know their new timetables and have now started setting up their devices ready for term 2.

We are also spending time familiarizing ourselves with WIndows 10 - heaps to learn but lots of fun too!!

Every Tuesday, I am running a SKILLS session for Year 7 students. Term one has focussed on settling in - organisation skills and finally starting to set up BYODs.  There has been about 20 students each week - this is quite relaxed with the kids having a hot chocolate while they work.

Another day of chess - the students played 3 games in the Championships as well as attending the Coaching Lounge after their game to review their game and work out where they could have improved.

Two lectures were held each day for the students to attend and gain a little more insight into the game.

The students all played really well with the senior team achieving a very credible draw for fourth place. The Middle team came in at fifth against some very strong competition.

After the Championships had finished, we headed over to the food hall for an afternoon snack.

Time to say goodbye to a fabulous few days.

Well done team, you added to your credibility in the Australian Interschool Chess World and you were outstanding representatives of the Harmony & Excellence that Leeming SHS is known for.

After a full day of competing, the students relaxed by playing Transfer Chess - a fun, team game of chess. They had loads of fun with other competitors.

Jacob's team wasn't doing too well, so this little fellow offered to play them :-)

After lots of laughs, we headed off looking for Lygon St, which everyone assured us was only a street away :-)

A group of students led the trek and after about half an hour, we thought we had better ask for directions!!!

Once we were back on track,  we all enjoyed a drink or/and an ice-cream and then walked one block to the Uni...

Finally, after much hard work and fundraising, we are in Melbourne at the National Championships. We flew out on the 'red eye' on Saturday night and despite the advice to have a sleep, most of the students stayed awake and chatted, played games and watched movies.

Once we settled into our rooms, everyone was keen to get out and explore the city so we headed off to the city for breakfast and a tram ride and saw the MCG, Melbourne Gaol, Flinders Station etc. It must have been a rocky ride though,  as quite a few of the kids fell asleep on the tram.

After a well earned rest, the kids played in a Warm up competition. They were all very tired but it was good for them to play against other schools and settle into the Championships.

Paddy did really well and came in third against some pretty tough competition.

In the Primary division, there is a tiny little 5yo boy whose chess skills have everyone in awe. Nathan was brave enough to play him!

Sunday night after dinner, everyone was quite happy to go back to the dorms and relax. The boiler blew up in our block, so there is no hot water - needless to say, showers are very brief and very cool!

Each student has a wi-fi plastic token for their room. I have lost count how many times we have had to call the Duty Manager to come and unlock doors where kids have left their token inside and the door has slammed shut.

Monday is finally here and the team is very excited and nervous at the same time! We have been split into 2 teams - Secondary Open for the year 10-11s and Middle Secondary for the Year 6-9s

The kids play their game, record their moves and then go to the Coaching Lounge where they then review their game with a coach. It is pretty full-on, but the kids have said they are learning heaps.

The hall where the Middle Secondary group is playing

Meals are interesting as the dining hall is also the competition area so at meal times, the kids are all eating their meals while playing chess.

The team looks very smart in their uniform and we have received several compliments about the students appearance and behaviour.

Books Light up our World

Leeming Library joined forces with the English department to help celebrate the wonderful impact of books on our lives. Many, many activities were held throughout the week culminating with the Dress up day on Friday. I came dressed as Her Imperial Majesty, Jadis, Queen of Narnia - The White Witch from the Narnia Chronicles and Ms Chick came dressed as a very impressive Maleficent.

Several Qr Code sheets were placed around the school and students had to find the answers to the questions. Most students worked in pairs using one phone with a QR reader and an answer sheet. All the questions were based on books that were shortlisted for Book Week, the Science Light Display and items around the school.

There were a lot of entries and the winners were Jaimee Yates and Renee Appleton who found all of the answers to the clues placed around the school. Congratulations – Enjoy your movie tickets!

Makerspacers have landed at Leeming Library!!

Tuesday Lunchtime – Students Lit up the world with Lanterns of light

Students came to the Library and created their own lantern to help light up our world with beautiful colours and books. Most of the lanterns were brightly coloured and looked amazing against the backdrop of light from the Secret Garden

Students flocked to the Library to Celebrate Book Week to see the Star Wars movie with the Jedi & the Siths face to face with their LIGHT sabres ......

Students joined in the Book Week fun and completed some fantastic digital book cover jigsaws. There was also some Interactive games and a couple of students also found the ‘Old fashioned jigsaws” quite challenging and enjoyable

A great week was had by all. It is a wonderful opportunity in this technological age we live – to celebrate the amazing impact that books also have on our lives

Congratulations to all competitors in the Leeming Senior High School Chess Teams who played in the Interschool Chess Tournament on Friday, 4th September.

The event took place in the library, with students from various schools in the metropolitan area involved in the Tournament. We had two teams made up from 21 very excited students who competed brilliantly and won first and second place.

As the students came in first and second, this enables them to take extra players to the State Finals. They are the only team to enter a team of 12 players at Perth Modern School on the 25th September.  The top players from both teams will compete with the remaining team members able to attend as spectators.

If the students are successful in their bid to play at the NationalChampionships, these will be held in Melbourne in November.

The Fiction area has finally completed its transition to Genres. The area looks a lot nicer and far more inviting to sit and read. Both students and staff have commented about how much they love the new look as well as being able to find books a lot quicker and easier.

Borrowing has definitely increased and we will be displaying a large batch of new books in the last week of term to promote reading for the holidays.

We have purchased a lot of replacements for the much loved but tatty novels - as well as purchasing lots of new titles to spike students interest in reading.